Esurance survey drivers on what distracts them when they drive.

In a new Esurance survey, 58% of drivers admitted to occasional or frequent distracted driving. That’s not a huge shock to anyone who’s been on our roads. The surprising fact is that those who admit to driving distracted are 36% less likely to be “very concerned” about the issue than those who claim to be “rarely distracted.”

So, how do we solve a distraction problem when many offenders don’t see it as a problem? But before we elaborate, let’s take a look at what’s distracting us in the first place. Not surprisingly, phone use still tops the list of driver distractions.

Even though almost all surveyed drivers (91%) believe that texting while driving is distracting, more than half (53%) of daily commuters admit to doing this very thing.

Furthermore, drivers who reported long commutes are 2.5 times more likely to be distracted by their phones.

Esurance conducted an online survey in December 2017 through January 2018. 1,057 vehicle owners in the U.S. were surveyed. The graph below showed the activities that people found the most distracting. 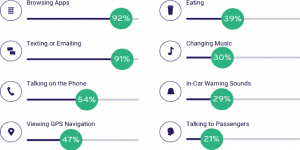 Texts, emails, and browsing top the list of distractions

Two things become increasingly clear in the survey results: 1) Most of us recognize that using technology like phones and GPS is distracting behind the wheel, and, 2) We’re willing to do it anyway.

While there has been a focus on technology to make driving easier, it was discovered that these assisted driving features, lane warnings, braking assists, nighttime sensors; may actually cause people to reach more for their phones as they become less focused on the road.

The survey did not do any research on using technology to limit or prevent distractions from a phone or other equipment. Instead, they heard from drivers who stated that they choose to turn off distractions and driving assist features so that they would be more focused.

Technology such as FleetMode can help those who want to turn of the distractions. It can also help the employer who needs their employees to be more focused on the road and less distracted. While smartphone distractions contribute to 25% of all accidents, businesses need lower accident rates to remain viable in the marketplace.